Indigenous sites of cultural significance are “frequently being damaged” due to a lack of consultation and understanding of Australia’s history, leaders claim, with the federal government hoping new laws will better protect such locations.

On Monday, the Morrison government announced a new agreement with the First Nations Heritage Protection Alliance – a network of more than 30 Indigenous stakeholder groups calling for stronger protection of Australia’s culturally-significant sites.

Under the agreement, a group of government and Aboriginal representatives will consult mining companies, state and territory governments and First Nations people about reforming the country’s heritage protection laws.

The damage resulted in the sacking of three senior Rio executives, an international shareholder revolt and a federal parliamentary inquiry.

“It highlighted the gaps in Indigenous cultural heritage protection, gaps across government, gaps across industry, the mining sector and the community. “The partnership that we’re announcing … is representing a new way of doing things.”

The Juukan Gorge rock shelters before they were destroyed in May 2020. 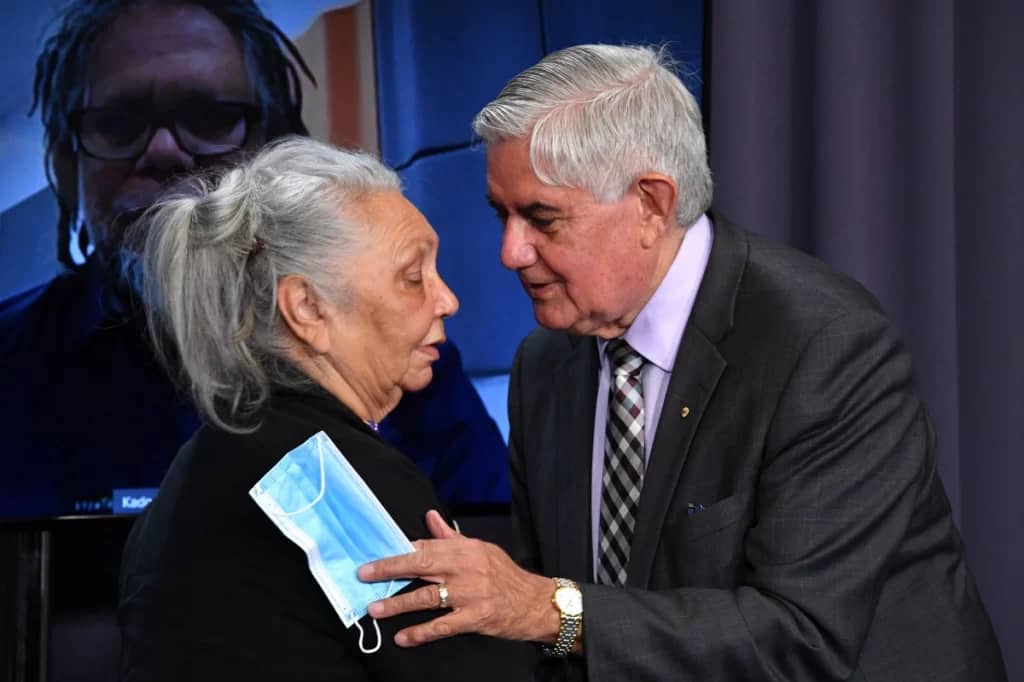 Heritage protection laws fall under the purview of the states and territories, but the federal government wants a nationally consistent approach to address policy gaps.

“Australia’s Aboriginal and Torres Strait Islander culture is an important treasure not only to Australia but the rest of the world,” she said.

“Despite this, our culture and heritage is frequently being damaged, disturbed, displaced and destroyed.”

However, Aboriginal groups argue the proposed legislation still favours the mining industry, and isn’t strong enough to prevent another such calamity.
Kimberley Land Council CEO Tyronne Garstone described the WA government’s bill as a “cultural catastrophe” that signified a power imbalance between the government, mining companies and traditional owners.

“Fundamentally, this bill will not protect Aboriginal cultural heritage and will continue a pattern of systematic structural racial discrimination against Aboriginal people,” he said.
Meanwhile, the South Australian parliament has launched an inquiry into whether it should update its heritage laws, after Premier Steven Marshall controversially approved a mining company’s proposal to drill near Lake Torrens – a sacred Aboriginal site.

Mr Marshall approved the drilling despite his department and the state’s Aboriginal Heritage Committee advising him that it could cause “hurt, sorrow and sickness” to traditional owners.
Indigenous Affairs Minister Ken Wyatt with Ngambri-Ngunnawal Elder Matilda House. Photo: AAP

“At the moment we’re looking at about 20 applications currently being considered under section 23, which means the Premier has the opportunity to have the final say against what traditional owners have been saying.

“There’s definitely a role for the federal government to step in and offer Aboriginal people an opportunity to be heard.”

“It should be more like $10 million to make [mining companies] think twice,” he said.

But Indigenous Affairs Minister Ken Wyatt said it was “better to have an approach in which there is common discussion” between mining companies, traditional owners and the government.

The Labor opposition welcomed the partnership, but said it was overdue. “We don’t understand why the government hasn’t taken steps to address known failures in the heritage protection framework and processes,” shadow ministers Terri Butler, Patrick Dodson and Josh Wilson said in a joint statement.

“A repeat of Juukan Gorge could still occur right now, so there is no time to waste.”