A final decision on whether Aboriginal cultural sites in Western Australia can be destroyed for projects like mines will still rest with a state government minister under proposed legislation, with no rights of appeal for Traditional Owners nor proponents.

Several land councils and Aboriginal rights activists say new heritage laws to be introduced to Parliament on Wednesday will not prevent another Juukan Gorge disaster, where mining company Rio Tinto destroyed caves in the Pilbara with evidence of 46,000 years of occupation. 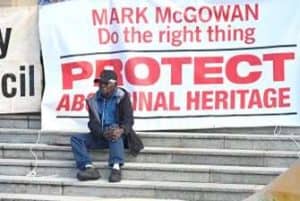 But the government is adamant the scales have been rebalanced between industry and culture.

Under WA’s existing Aboriginal heritage law, introduced in 1972, proponents such as miners and government departments have been able to apply through Section 18 of the act to damage cultural sites regardless of their significance.

The Aboriginal Affairs Minister through the 50-year-old legislation could then approve or deny a Section 18 application. Only a handful of applications have been rejected and Traditional Owners have had no right of appeal when Section 18s were approved despite proponents being able to take the government to the State Administrative Tribunal if they were knocked back.

A new Aboriginal Heritage Act was worked on for several years during Colin Barnett’s terms as premier but the process stalled. Former Labor minister Ben Wyatt took up the job during the first McGowan government but handed the reins to Stephen Dawson after his political retirement before this year’s election.

The COVID-19 pandemic also delayed consultation on the long-awaited law, which has gone through three drafts under Labor.

In August, stakeholders were told about final changes to the draft bill but did not get a chance to see the new law in its entirety until Tuesday afternoon.

Previous drafts had included a right of SAT appeal for both proponents and Traditional Owners regarding ministerial decisions for the new process which replaces the old Section 18, but this was removed from the final version of the bill.

SAT appeals remain for circumstances where the minister issues or lifts a prohibition order on a proponent. Human rights lawyer Hannah McGlade, of the Kurin Minang people, said Premier Mark McGowan was showing a complete lack of leadership, raising concerns over the latest changes to the act.

“[The government] just want to continue the government and the minister’s right to damage and destroy Aboriginal land in the interests of the government and its economy and its relationship with mining companies,” she said. “In the history of the Aboriginal Heritage Act there’s only three or four times the government has rejected a heritage application.
“They’ve allowed consistently mining and development to happen.”

Dr McGlade is a member of the United Nations permanent forum on Indigenous issues and together with the Environmental Defenders Office and four other prominent WA tradition owners – Martidja Banjima elder Slim Parker, Nyikina Warrwa woman Anne Poelina, Nanda Widi man Clayton Lewis and Ngalia leader Kado Muir – made a request to the UN’s Committee on the Elimination of Racial Discrimination for a review of the new bill in September.

The UN request was made on the basis the bill gave no ‘veto’ or final say on what happened with heritage to Traditional Owners – like there is in the Northern Territory for mining exploration – and an “insufficient protection of the right to culture”.

Mr Muir, who is also the chair of the National Native Title Council, said the Labor government had ignored the requests of Traditional Owners to introduce the bill.

“Stephen Dawson Minister for Aboriginal Affairs is intent on proceeding with a Bill that fails to reflect minimal human right standards which would ensure Aboriginal peoples in WA are equal before the law,” Mr Muir said. “We want a say in protecting our sacred sites, yet the minister is reserving the right to destroy sacred sites.”

“This was an opportunity to co-design a bill between Traditional Owners, Aboriginal people, the resource sector and the wider West Australian community,” he said. “A chance to walk hand-in-hand into the future, with the bill that everyone supports. “What we have now is a bill that no one has the ability to scrutinise, no one has the ability to consult with government as they are ramming it through Parliament like they did electoral reform.“The minister of the day can execute the destruction of Aboriginal cultural heritage because the minister has the ultimate power in making that decision.”

The state government has maintained through much of the consultation it would not introduce any ‘veto’ clause which could see less mining projects take place like has happened in the NT.
Instead, it wants to introduce a system which stops companies, such as miners, from gagging Aboriginal groups they have land-use agreements with around cultural heritage management.
The new bill forces proponents to consult with Traditional Owners and agree together on cultural management plans where the former wants to develop near heritage sites.

A revamped Aboriginal Cultural Heritage Council will be the main gatekeeper in making decisions on whether to approve cultural management plans. If a party to the plan dislikes the council’s decision it then will be able to make an appeal to the minister.